skip to main | skip to sidebar

I have been looking forward to this moment. Being a staunch Rajdhani Express fan (have been traveling since 1979 on Howrah Raj), I wanted to see first hand how different the Sealdah-New Delhi Duronto Express will be.

The first Duronto Express was flagged off by Smt. Mamata Banerjee (Honorable Railway Minister) from Sealdah Station (Kolkata) at 1700 pm on September 18, 2009. The 2259 Sealdah Duronto is India's first point-to-point non-stop train and has been created to cover the distance of 1454km from Sealdah to New Delhi in 16h 20min. The Sealdah Rajdhani takes 17h 55min with 6 halts. 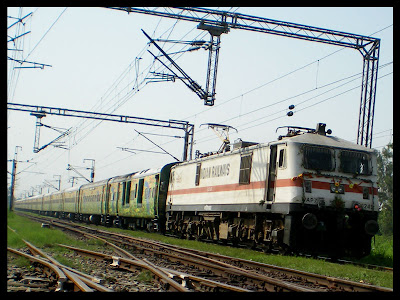 Well! I was hugely disappointed. The SDAH Duronto arrived at Pragati Maidan at 0945 am. The right time for reaching NDLS (New Delhi Railway Station) was 0920 am. But more than that it was the color and graffiti/painting on the rakes that was far more disappointing.

In fact, if Mamata Di and the "big-wigs" of Indian Railway could launch the fastest train in India then they should have considered the visual impact of the rakes. The green is similar to that of Garib Rath, a trifle bit lighter and the entire floral design is way out of place. IR could have either chosen a more formal look and appeal for enhancing the image of the train OR they could have added more value by having separate paintings on each of the rakes. Paintings depicting different faces of Bengal like Howrah Bridge, Dakhineshwar Temple, Ma Durga, Eden Gardens and much more. That would have at least symbolized the "Cultural Spirit of Bengal"

But I would still say that the effort was valiant keeping in mind the fact that Mamata Di had very little time to get this train up and running. Her concept of "Ma, Mati, Manush" is the theme of the abstract graffiti on Sealdah Duronto. Maybe, the later versions of the Sealdah Duronto will have graffiti that people can relate to with ease.

Secondly, the rakes are quite old. In fact some of the coaches are almost 10 years old (1999). Seems like the rakes are a mix of Garib Rath and ICF Rajdhani coaches. At first instant the rake didn't look Hybrid to me but the next time around I will have a closer look.

The SMB (Side Middle Berth) has been used in the 3AC Economy and hence the lower fares. The SMB is not a great idea because it means less space.
Overall Picture - Not Impressive!

A Fare comparison with Sealdah Rajdhani

The Sealdah Rajdhani Express Runs daily while the Duronto will run on Thursday and Sunday from Sealdah (2259) and Friday and Monday from New Delhi (2260).

Except for a technical snag in the loco GZB WAP-7 30249 (fairly new loco), I believe the run was smooth. The P7 30249 started off from SDAH with its front Panto up but was spotted at Pragati Maidan with its rear Panto up. Hopefully, the snag has been taken care off.

Look forward to the Chennai Duronto at NZM (Nizamuddin) on Tuesday with LHB rake!
Some of the other trains/Loco that I saw today include: